On the benefits of a philosophy major 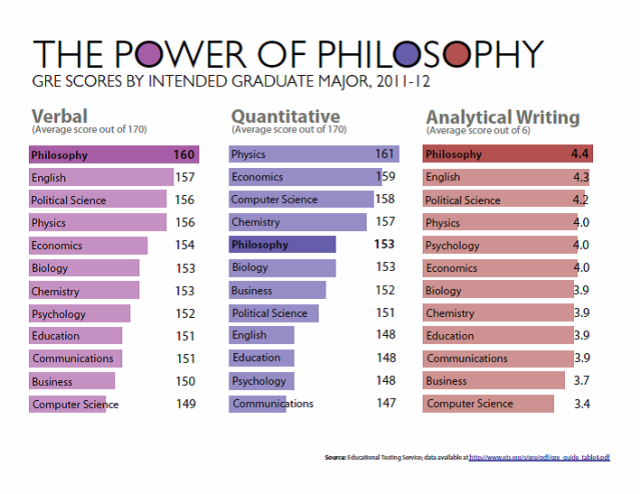 My fantastic colleague, Ty Fagan, made this graphic from recent data coming from the Educational Testing Service.

I thought it was worth a blog post, because students interested in a philosophy major often ask me whether they should do a double-major or minor in “something more practical.” Often, business is the major considered to be more practical. Sometimes Political Science, History and English are even cited by students and parents to be more useful than philosophy.

One of my good friends, Andrew Wicklander, runs his own project management group and software company. His wife, Maile, owns a yoga studio. They are both the sort of “job-creators” touted as crucial to the success of America. Andrew says that when he and Maile are hiring, they do not consider a business major to be practical preparation for job candidates. Instead, Andrew and Maile look for evidence that a candidate can identify and solve problems related to their industries and products. As Andrew says, “Often a person with a business degree has memorized a map of business processes and solutions. But rarely will that map be an accurate depiction of the current state of a business or industry. What we want is a person who knows how to use a compass, not a person with an outdated map.”

Andrew wants to hire smart, articulate people who can identify problems, take them apart into manageable bits, and solve them in unique ways. In philosophical terms, this is the ability to perform critical reasoning. Critical reasoning is defined as “the intellectually disciplined process of actively and skillfully conceptualizing, applying, analyzing, synthesizing, and/or evaluating information gathered from, or generated by, observation, experience, reflection, reasoning, or communication, as a guide to belief and action.” Elmhurst College, like most colleges and universities, offers Reasoning as a 200-level philosophy course. The skills learned in this course are strengthened as students advance in their major via their application to increasingly difficult problems in courses such as Philosophy of Mind, Epistemology, Environmental Ethics, and Biomedical Ethics.

Thus it is not a surprise (at least to me!) that philosophy majors are some of the best with regard to analytical skills, evidenced by the above graphic. According to the Educational Testing Service, which administers the GRE, the analytic writing section tests “critical thinking and analytical writing skills. It assesses [your] ability to articulate and support complex ideas, construct and evaluate arguments, and sustain a focused and coherent discussion.” Philosophy majors are also the best with regard to verbal ability, and the best of the liberal arts students at quantitative reasoning. Simply put, our students have the best all-around intellectual skills.

What employer wouldn’t want an articulate employee with great critical reasoning skills? Of course, I’m not attempting to make the claim that a business major, or a political science major, is never useful. But matching the content of the courses taught in these majors to jobs in business or policy should not be assumed. Given the fluid, uncertain nature of the job market and the technology used in work, is it really impractical to become skilled at information analysis, problem solving, and argument? I don’t think so.

← Is ADHD a disease?
Is it okay to neuro-rehabilitate? →