What the heck does a brain scan really measure? 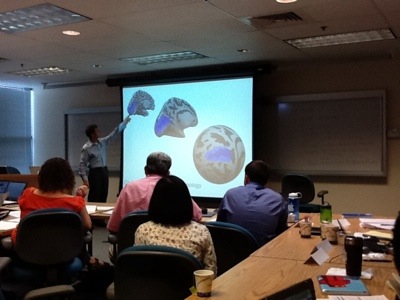 I came to bootcamp to learn more about the data generated by neuroscience. Really, I want to be able to parse good data from bad data, which means I need to know how the data is generated. The primary tool of the neuroscientist is brain imaging technology: this technology eventually forms the basis of the pretty pictures which purport to show the neural correlates of this or that psychological process (such as face recognition or empathy).

After reading dozens of neuroscientific studies I thought I had a pretty clear idea of what an fMRI (functional magnetic resonance imaging) scan told us. I already knew that an fMRI doesn’t measure brain activity (neuronal firing, for example) directly, but instead measures blood flow to certain regions as a proxy for brain activity. But our introductory lectures helped me understand why a giant magnet (which is what that tube thing a person is slid into when when they get a fMRI is) can tell us something about blood flow.

Take away lesson at this point: the scientists running the imagining technology are measuring the action of protons within atoms. Now, we get to the good stuff: the measure of blood flow. Hemoglobin (in blood) has different magnetic fields when it is connected to oxygen or not. This means that MRI technology allows us to measure oxygen levels in different parts of the brain. The final piece of the puzzle is that changes in metabolic processes in neurons (namely, them firing) effects changes in blood levels close to those neurons. When they fire a lot, more oxygenated blood goes to that area, which means the MRI technology can “see” which areas that are very active during a certain cognitive task.

The relationship between the neurons firing and oxygen rising within the blood flow close to them is actually a bit mysterious. Hoovering up the leftover neurotransmitter material from rapid firing, and putting it where it goes, may have some effect on the use of oxygen.

How cool, right? But even after this very simplified explanation, one needs to take note of certain caveats. First, neurons are really small, and the vessels that bring blood to them are bigger and obviously don’t occupy exactly the same space as the neurons they serve. So when you are measuring blood flow, you are measuring an area generally larger than than the active neurons. Also, neurons are active even when they aren’t really “active” in the more interesting sense: that is, they constantly sort of just murmur to themselves (firing slowly), and then when they are directly involved in an active cognitive process, they might be said to shout really loudly (firing rapidly). They essentially never just sit there quietly not firing at all. So neuroscientists have to come up with ways to distinguish the muttering from the shouting. They do this by divvying up the brain into small cube-shaped areas, called voxels, which are 3x3x3 mm or smaller. (This is roughly the size of a small eraser at the end of a pencil.) The scientists look to see, overall, the level of oxygenated blood within a voxel during a task. If the neurons in the voxel seem really active, they might color it red, whereas if they are only muttering, it might get colored blue. During some tasks, a voxel may contain some neurons murmuring and some shouting. How these voxels get coded is tricky. In the end, a colored picture of a brain “lighting up” is only as good as the neuroscientist’s method in determining what is, and what is not, an “active” area.

In addition, in an fMRI, action happens 3-4 seconds after an EEG would pick up a spike in neuronal activity. This is because it takes a while for the blood flow to keep up with the neuronal spike (and then for us to read the magnetic orientation of the hemoglobin, etc). So the measurements suffer from a delay (that can be adjusted for by the scientist).

But here is an amazing fact: the human neuronal system is a low-pass linear system. What the heck does that mean? Just this: twice as much neuronal activity leads to twice as much blood flow to the general area. So measurement of blood flow is a pretty good proxy of brain activity, overall.